Fiber for the healthy gut! 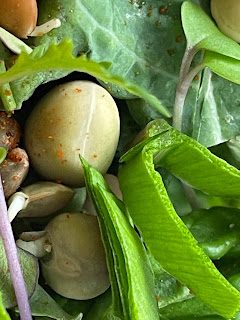 Fiber may be the most important macronutrient in the human diet. While the popular media is obsessed with carbohydrates and protein, one of the most important nutrients is largely forgotten. Fiber is far more than just pooping - fiber is the primary nutrient for our healthy microbiota. Today's lunch was fibrous. Fiber feeds healthy gut microbes. And since a healthy gut is associated with healthy mind and body, fiber is among the most important of all "health foods." Unfortunately, the nutritional conversations tend to fixate on protein consumption and reducing carbs, and fiber is often relegated to gerontology conversations. The emerging research on the microbiotica underscores the importance of fiber in a healthy diet. It's estimated that 97% of Americans do not get their Recommended Daily Allowance of fiber. According to the Mayo Clinic , women should try to eat at least 21 - 25 grams of fiber per day, while men should aim to eat 30 - 38 grams of fiber each day. Wit
Post a Comment
Read more 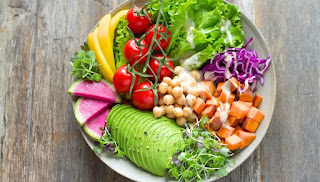 Prioritizing feeding the gut microbiota has yielded unexpectedly positive results. Both Collette and I have noticed improvements in our skin, sleep, work capacity and focus, to name just a few of the benefits.  And interestingly, these improvements continued for several weeks... until we hit speed bumps. Big, square-edged speed bumps! Last week I had the first stomach bug that I can remember. Since childhood? Without sliding into the realm of TMI, I awoke one night to an unexpected surprise, and then spent the next few days fending off waves of nausea, fatigue and a low-grade fever. At first I chalked it up to an uninvited food-borne pathogen, but after 24-hours extended into a couple days, that seemed less likely. I then pinned the blame on the norovirus that's been running roughshod through the University of Wisconsin - Madison community. Certainly I had been exposed, though it sounds like norovirus generally runs its course within just a few days. Or could it have been a symptom
Post a Comment
Read more

Food: Focus on the Fermented 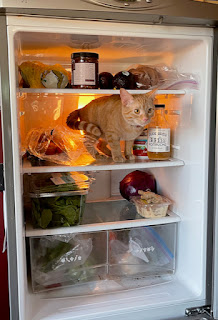 The Microbiotaphilic Reset Diet (MRD) contains lots of fermented food such as kimchee, sauerkraut, vinegar, and kombucha. While these fermented foods and other forms of probiotics are teeming with bacteria that's beneficial to the gut, the benefits are not about "seeding" the microbiota with beneficial bacteria. These "passers by" improve your gut health by strengthening the gut/blood barrier (preventing leaky gut) and boosting your immune system. Biddy found little that wasn't fibrous or fermented The beneficial microbes in probiotics and fermented foods are unlikely to set up residence in your gut. In general, the microbes in these healthful foods are not adapted to survive in the human gut, largely because the gut does not contain the foods that they need to survive and thrive. These vagabond bacteria do, however, confer significant health benefits by strengthening the integrity of your intestinal wall. There are two ways that this strengthening occurs -
1 comment
Read more 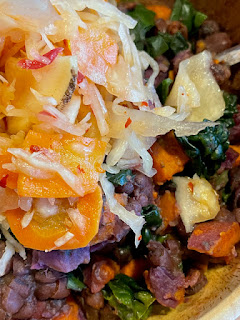 If you live with allergies, are susceptible to illness or manage autoimmune disease, increase your consumption of the fiber that naturally occurs in unprocessed plant foods. The health of the barrier that keeps undigested food and pathogens out of your bloodstream, a crucial part of a healthy immune system, requires a diet containing bountiful fiber. Here's how: a healthy immune system = healthy gut (A=B); a healthy gut = high-fiber diet (B=C); and as a result, healthy immune system = high fiber diet (A=C). Healthy immune system = high fiber diet The large intestine is lined with mucous. Yep – gross, slimy mucous. Not that many years ago, alternative health practitioners viewed this mucous warily, and “treatments” such as colonics and various “cleanses” to reduce intestinal mucous were promoted to cure various ills. Thankfully mucous is now recognized for is essential role in preventing “leaky gut,” the condition where pathogens or undigested food escape from the large intestine an
3 comments
Read more 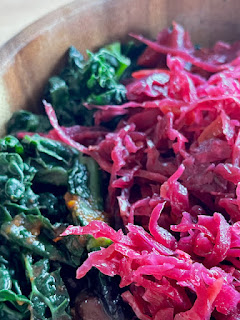 Is the glass half-full or half-empty? While I’m typically pretty optimistic, my eating habits have historically been half-empty in their approach. In my adult life, I’ve periodically followed strict elimination diets to cleanse and identify food sensitivities. In a change of approach, I recently embarked upon a Microbiotaphilic Reset Diet. Food: fibrous and fermented After another long COVID Winter, Collette and I decided to shake up our eating habits with a dietary reboot. Our initial inclination was to repeat the elimination diet we last followed ten years ago, though recent scientific developments led us to rethink that approach. Since our last foray into eliminating foods, there has been an explosion of research on the human microbiota. Books such as The Good Gut and Fiber Fueled made the science accessible, and both books reframed my approach to food. Rather than focusing on the foods that historically made me ill, I focused more on fortifying my gut’s resilience. For the pas
2 comments
Read more

The poet, Mary Oliver, has long sung to me with her elegant and spare use of words. Regarding attention, Mary Oliver wrote "To pay attention is our endless and proper work." Endless and proper work - in my experience, those few words contain multitudes. Other than what I pay attention to, there's not a heck of a lot I can really control in this life. I may set an intention with the conviction that I am in charge of my trajectory, though causes and conditions usually determine outcomes more than any hardheaded or steely resolve on my part. Witness the ongoing fallout from the COVID-19 pandemic! While much of life may well be beyond any of our individual control, the ability to volitionally direct attention remains not only under our control, but is our  endless and proper work . As part of this endless and proper work, I recently deleted the most time and energy sucking apps from my various devices. It was easy to bid adieu to Facebook and Instagram, though much harder to
Post a Comment
Read more 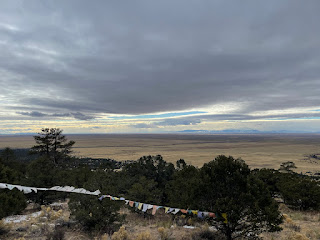 In my last posting, I wasn't entirely forthcoming. In addition to significantly reducing my interaction with social media, I concurrently limited my consumption of the news media. I'm not sure which of these variables contributed to the recent, positive changes in my mental state, though I can confidently say that I've enjoyed more clarity and contentment in the past month than I have in recent memory. I've long prided myself in being informed by engaging with trusted media outlets. Whether listening to legacy radio news programs or reading articles in established newspapers, I have long taken the time to track what's going on in my neighborhood, country and the world. And this is still important to me. On the other hand,  I was spending an increasing amount of time scrolling mindlessly through the news. And even though I'm not doom-scrolling to the extent that I did a few years back, I still found myself spending an inordinate amount of time engaging with the n
Post a Comment
Read more
More posts

Scott Anderson
Scott A. Anderson has spent most of his life exploring the interface of brain and body. A long-time yoga and meditation teacher, Scott returned to grad school to explore the body/brain connection in greater depth in the Watson Human Performance Lab, and is a Ph.D. candidate in the Kinesiology department at the University of Wisconsin - Madison. His research interests include mindfulness-based postsecondary education and mindfulness training for athletes. In addition to school, Scott loves to bike, ski and work out.